Yesterday I discovered Package Explorer for opening up OpenXML documents, validating and editing. Today I have found OpenXml SDK Tool.

SDK Tool is a great software from Microsoft for every developer working with OpenXml. SDK Tool is similar to Package Explorer, but you don’t have edit functionality. And validation messages are not as good. But you get an instant access to documentation about any possible element you can imagine.
And the killer function is CODE GENERATION! It generates C# code for any element that is available on the page.

You can create a Word Document, open it up in SDK Tool and it will produce you a full C# listing to create exactly the same document from your code! This is just fantastic! Using this tool today I was discovering how things done in a simple way: add page numbers to an empty Word-doc, open it up in SDK Tool, find the part about page numbers (probably this was the hardest part), copy the generated code, slightly refactor and I had page numbers in my generated documents. All it took about 15 minutes and I did not use Google or any other documentation.

Anyway, download SDK Tool from here: http://www.microsoft.com/en-gb/download/details.aspx?id=30425. Select only SDK Tool to download, you won’t need anything else available on the page.

You can select any element of the document and see documentation to that, with all available child node types 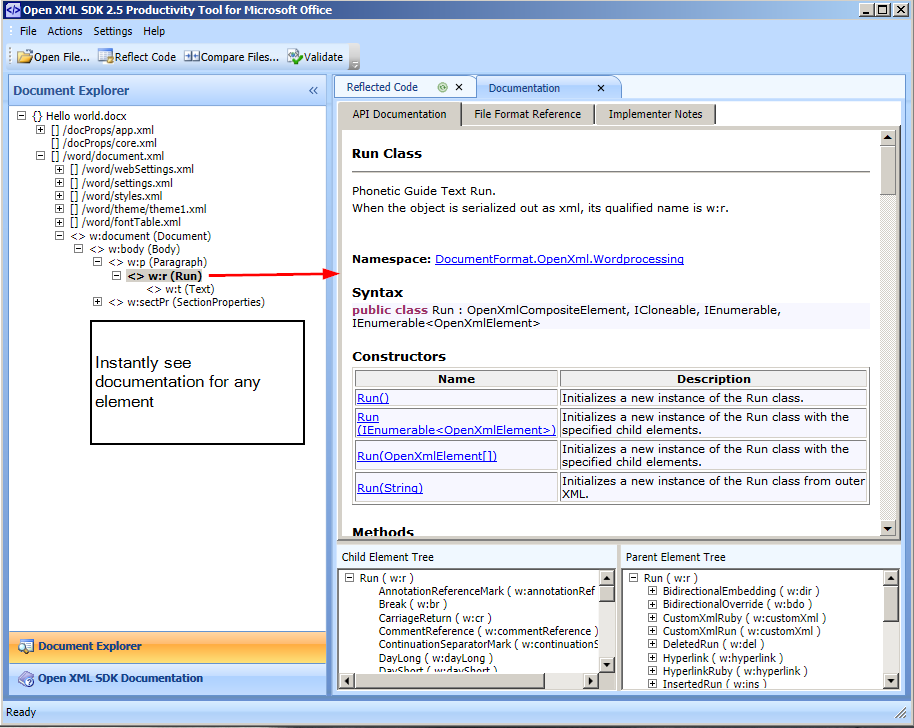 You can run validation of any element in the document: 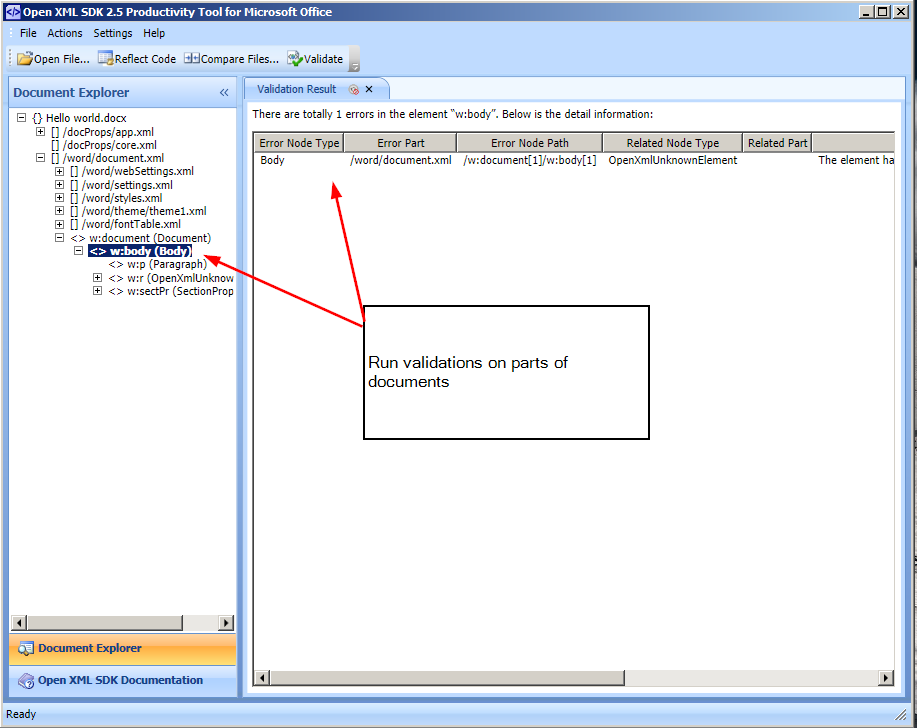 Another quite useful function is to compare the documents. Yesterday I had to do that to find out how a particular feature is implemented. Now, when you have a generated code, this may be not so useful, but you can compare 2 Word documents and it’ll show you the differences in containing XML.

Stackoverflow is useful until you have a quite specific question and you have used Google before asking a question. My last 11 questions were left with no answers for one or another reason.

Today was not an exception. My question about debugging process during OpenXml development was left unnoticed. So I had to figure out for myself! Sigh!

UPDATE: I have discovered Open XML SDK Tool that adds a lot of features to this game

Anyway, I digress. My current task involves generating a MS Word document from C#. For that I’m using OpenXml library available in .Net. This is my first time touching OpenXml and maybe I’m talking about basic stuff, but this was not easily googleable.

Many times after writing a Word file, I try to open it and see this message:

The file .docx cannot be opened because there are problems with the contents. Details: Unspecified error

END_OF_DOCUMENT_TOKEN_TO_BE_REPLACED

There is a follow-up article about integration tests in 2016. Recommended for reading if you are using VSTS and looking at Cake build system

Unit tests are fine and dandy, but if you persist your data in database, persistence code must be tested as well. Some possible bugs will never be picked up only by unit tests. One of the issues I’ve been burned by is entity validation, another is a missing foreign key relationship.

Validation issues can burn you very easy. Look at this bit of code:

NB: This is just a sample code. Nowhere in my projects we do such things.

END_OF_DOCUMENT_TOKEN_TO_BE_REPLACED

We are hitting the deck with our site performance and optimisation. It is fast, but we want it uber-fast! So next stage is to have IIS up and active all the time with all the views being compiled and ready before any user comes to them.

By default, IIS compiles views only when a request for that view comes in. So first time a user visits some rare page in your application, user is waiting a bit longer while IIS does Just-In-Time compilation. And actually if you look under the hood IIS does stacks of things before it shows you a web-site.

Despite of common believe, IIS does not run your web-application from /bin folder, it copies all required files to a temp folder. To be more specific, it copies files to c:\Windows\Microsoft.NET\Framework64\v4.0.30319\Temporary ASP.NET Files\. Reason for that – file locking. For just-in-time compilation, it needs to update binaries, but in /bin folder binaries can be locked.

END_OF_DOCUMENT_TOKEN_TO_BE_REPLACED

HTTPS everywhere is a common theme of the modern infosys topics. Despite of that when I google for implementation of HTTPS in ASP.Net MVC applications, I find only a handful of horrible questions on StackOverflow, about how to implement HTTPS only on certain pages (i.e. login page). There have been numerous rants about security holes awaiting for you down that path. And Troy Hunt will whack you over your had for doing that!

See that link above? Go and read it! Seriously. I’ll wait.

Have you read it? Troy there explains why you want to have HTTPS Everywhere on your site, not just on a login page. Listen to this guy, he knows what he is talking about.

END_OF_DOCUMENT_TOKEN_TO_BE_REPLACED

Note for yourself, when you are registering odata route in web-api configuration, it must be placed before the default catch-all route. I.e. :

And no, nothing magic about OData there, just standard routes registered in Asp.Net application.

I’ve updated one of our Azure-hosted projects from MVC3 to MVC5. And at the same time I’ve bumped from .Net 4 to version 4.5.1. And after deployment I’ve bumped into a cryptic error:

A quick search revealed that if your service is based on something below Windows Server 2012 R2, you’ll get this error for .Net 4.5.1. To fix this go into all your *.cscfg files and in the very top of the file, in the signature of <ServiceConfiguration> node, there is osFamily="3" property. Update this to osFamily="4":

Don’t forget to update this in all of your .cscfg files. By the way, this is recommended by Scott Gu in one of his announcements.

After using MVC bundling and minification for a bit I run into a few problems. All of them are well known and will cause you trouble.

First of the problems I encountered – reordering of files in the bundle. When I add to bundle Main.css and then add MainOverrides.css I bloody-well mean it to stay in this order, cause overrides will not do anything if they are posted before the main file. Same goes to jquery and plugins.

Another issue I run into was image urls inside of css. When css files are bundled, they are output as:

END_OF_DOCUMENT_TOKEN_TO_BE_REPLACED

Generally Exceptions are usually thrown by parts of the code that encounter unrecoverable situation. Like famous NullReferenceException is thrown when code tries to access properties of object that is null. I’m sure you know this, don’t need to tell that 101 of programming again. My point is that exceptions are always thrown and it is down to other parts of code to catch exceptions and do something with them. Because if exceptions are not caught, the’ll bubble up to the top level and will crash your application.

I’ve never seen any methods that return exceptions. Never thought of exceptions as something that can be returned by a method. Have you?

Today I’ve spent some time doing work on bundling and minification in MVC5 project. I did open dotPeek decompiler to check how it actually works. And I came across this bit of code:

I’m not posting full source code here, but it is available from MS Symbols server. That’s where dotPeek got the sources from

Note in the block above a method does something and exception is returned. It does not throw exception. Exception is thrown a level closer to user – method I’m showing you is public and I’m going to use it. Method that returns exception is internal and not accessible for consumer.

My first reaction was that this breaks Clean Code convention: method modifies state of application and does not return objects, or method returns information, but does not change anything. Basically commands and queries in CQRS: commands for writing, queries for gathering data.
Here we have a clear violation – method modifies program state and returns exception.

I went exploring deeper and looked through some other methods. The convention in this library is: private methods return exceptions. Public methods throw exceptions. This looks strange and new to me.

Remembering university course on machine code (a.k.a. Assembler, yes, I’ve done that one and loved it!) throwing an Exception involves walking execution stack which involves a lot of CPU cycles and tracing (details escape me now). This results thrown exception being expensive in terms of CPU cycles. A quick googling revealed a stack of answers and blog posts to confirm my understanding.

Given this, I presume this technique is used in the library to avoid performance penalty on throwing an exception. And the deeper the exception is thrown in the execution stack, the slower it is. Also this technique adds a lot of extra boilerplate code to methods. If you use traditional throw new Exception() then instead of this:

you’d simply have this:

Where private method would just throw an exception.

Bottom line. Unless this is used for purposes other than optimisation, don’t use this technique – it’s confusing and against conventions. And if you find your exceptions to be a bottleneck (enough to optimise it), you throw way too many exceptions and need to rethink your application. If there is other purpose to this approach, please tell me!

Yesterday Nuget server was down for couple hours. That wasn’t nice. I got stuck for a bit, because I blew up my environment and needed to re-download all the packages again. And some of them were not in the local cache. And just the same night Mr. Mark Seemann blogged that auto-restore in Nuget is considered harmful. And I could not disagree with Mark. Amount of time I’ve spent on trouble-shooting missing packages or package restore in the last year mounts to probably a week. Most of that time was spent for package restore on build servers. And just for these little shits I had to dig very deep into TFS build template, modify it, so it can restore packages before attempting to build it. It was not a nice experience.

Anyway, long story short. Today I decided to give that advice a go and check in packages for one medium sized project hosted on TFS. I went to Source Control Explorer, added existing folder of packages, it added a big number of files and then I checked-in.

Build server crunched for a moment and failed the build: references are not found. Strange. Connected to the build server and discovered that TFS by default ignored *.DLL files but included all other crap that comes with nuget packages (xml files, readme.md, source code, etc.). That was strange. After a bit of digging I found that TFS has a list of file-types that it looks for.